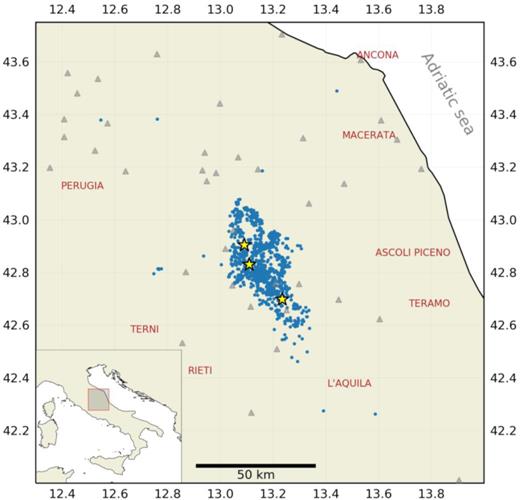 This study describes a deep convolutional neural network (CNN) based technique to predict intensity measurements (IMs) of earthquake ground shaking. The input data to the CNN model consists of multistation, 3C acceleration waveforms recorded during the 2016 Central Italy earthquake sequence for M ≥ 3.0 events. Using a 10 s window starting at the earthquake origin time, we find that the CNN is capable of accurately predicting IMs at stations far from the epicentre which have not yet recorded the maximum ground shaking. The CNN IM predictions do not require previous knowledge of the earthquake source (location and magnitude). Comparison between the CNN model predictions and those obtained with the Bindi et al. GMPE (which requires location and magnitude) shows that the CNN model features similar error variance but smaller bias. Although the technique is not strictly designed for earthquake early warning, we find that it can provide useful estimates of ground motions within 15–20 s after earthquake origin time depending on various setup elements (e.g. times for data transmission, computation, latencies). The technique has been tested on raw data without any initial data pre-selection in order to closely replicate real-time data streaming. When noise examples were included with the earthquake data the CNN was found to be stable, accurately predicting the ground shaking intensity corresponding to the noise amplitude.